A Fool, Her Money, and Matters of the Heart

That’s an image on the Veterinary Cardiologist’s website. Scary, no? I sure don’t know what the image means, but I hoped to hell when I saw it that Dub’s heart didn’t look like that.

After more than a week of debating the merits of advancements made in canine cardiology, I decided to bite the bullet and take Dub to the specialist.  His foot — if you will recall he hurt it last week — is mending nicely. And our regular Vet Dr. H -, upon foot follow-up exam, reiterated the urgency of Dub’s heart condition. “I’ve been having nightmares about this one’s ticker,” she said, as she cut the bandage off of his paw.  Nightmares? Really? I began to wonder if perhaps she was suffering some guilt around not having correctly diagnosed our first dog’s cancer early enough for treatment. Not that we would have put our dear Samson through chemo. (Maybe.)

My phrasing, — “I decided” — was very much deliberate, dear reader.  This is because it was all me. DH and I had talked it over at length, several evenings in a row, and we had come to the agreement that it was ridonkulous to take our 5-year old dog to a cardiologist for an estimated expenditure of — are you sitting down? — $545.  I mean seriously.  We already knew that we wouldn’t be taking extreme measures to extend Dub’s life beyond its natural course — no pacemakers, no surgery, etc.  And medical treatment, from what the oracle that is Google had told us, was about treating symptoms, not delaying the inevitable. He had no symptoms, ergo, no need to see a specialist.

So why the change of, um, heart?

Dub started sleeping with me. Dub’s not usually a lover, but while his foot was hurting and he had to wear the awful cone-of-shame all night, he sought some comfort in the curve of my back.  It would take him three tries to get up on the bed as he navigated the vertical leap avec cone, and then after he finally arrived, he’d slap the cone down on my thigh or my belly, lay down his weary head inside of it and sigh. And in that simple, ludicrous moment, I just needed to know. I needed to know if this dog’s heart was going to crap out on me in the near future. I needed to prepare myself.

I actually snuck him to the cardiologist. I worked from home yesterday and didn’t tell DH my plan. All morning, I steeled myself, vowing to hang tough and minimize the number of tests performed, dollars spent. I will NOT pay a lot for this muffler.

Once we got there, I was feeling pretty damn ridiculous, I gotta say. Dub was absolutely manic, jumping and lunging all over the waiting room and other “patients” there, prompting raised eyebrows of all humans encountered. “Has he been to obedience training?” one woman asked. Said woman had a purse in her lap and a cat in a box.

“Not so much,” I smiled.  You stupid bitchy cat lady.

“What’s he here for?” asked another skeptic, who held a quivering Bishon bearing only patches of fine white hair.

“His heart?” I squeaked.

We finally made it back to the exam room where Dub calmed down: 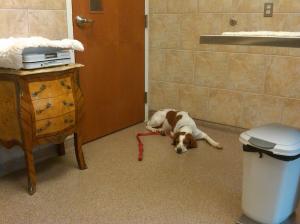 How ridiculous do I feel now that we're actually waiting for the cardiologist?"

And I read the writing on the wall:

Finally, finally, we were visited by Dr. S-, who seemed like an incredibly sane person. 100% reasonable. Reminded me of my birth doula in a patchouli-and-clog-wearing, long-grey-haired kind of way. She agreed to forgo the full work-up (cardiac ultrasound), in lieu of an EKG and some extensive stethoscope maneuvers.  After some poking and careful listening and thoughtful questioning, here was her diagnosis:

No medications needed. OK for normal activity and diet. OK for anesthesia if needed in the future.

Sigh.  At least it wasn’t $545. And I got what I came for; I’m going to be throwing Dub’s slimy Frisbee as long and far as I can for the foreseeable future.

I called DH a few hours later and started with the good news, “hey, guess what? Today I saved almost $300!”

One response to “A Fool, Her Money, and Matters of the Heart”